Posted on by Gary Randall

From Sod-Roof Cabin to Boardroom

Midway through my dad’s senior year at Moscow High School in the mid-1920s, he and one of his renegade friends decided to drop out and go to Bolivia to herd cows or sheep or something. Obviously, this was not a good idea, but one of the teachers corralled him and got him to finish high school—which led to interesting jobs in the mountains of the Clearwater country with the Potlatch Fire Protective Association.

Potlatch Corporation had very extensive land and timber holdings in Idaho and other states, which had been helped greatly by the granting of railroad rights-of-way to the federal government in exchange for western land holdings. In the Clearwater country, young men were hired to dig and maintain trails throughout the company’s holdings, and to fight fires caused mostly by lightning. Dad, whose birth name apparently was James Lester Randall but who somehow ended up being called Lester James, and his older brother Jess signed with Potlatch right after their high school years. This would have been the summer of 1925, and they worked out of a place called Boehls Center, which eventually was covered by the waters of Dworshak Reservoir. Their jobs began around May 15 of each year and ended around mid-September.

When Dad started clearing trail that first summer, the mosquitoes were terribly thick. His initial encounters with them left welts, but he also developed immunity to their bites—not a usual result, but it seemed to work for him. His assignment was deep in the woods near Little North Fork of the Clearwater River, at a place called Goat Mountain. Bears lived there, too—which almost led to his early demise. 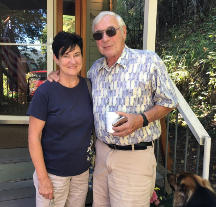 Gary Randall was raised in Wallace and earned a bachelor’s and a law degree from the University of Idaho. The first editor of the Idaho Law Review, Gary was a trial lawyer for the Internal Revenue Service and taught for thirty years at Gonzaga Law School. He and wife Sharon Cleveland Randall (shown here), live in Colbert, Washington, and have two children and three grandchildren.
View all posts by Gary Randall →