And a Cougar on the Prowl

Story and Photos by Rowan Brown

Flying over the Rockies last summer was the first glimpse I got of how different the West truly is  from my old, low mountains of South Carolina. I had come to Idaho to work for the Forest Service, having applied for a Youth Conservation Corps crew in the Nez Perce– Clearwater National Forests. I grew up playing in the foothills of the Appalachians, and though I love my school in a small South Carolina city, it keeps me out of the woods for the most part, and I miss that terribly. In looking for a summer job, I was looking for mountains. The Rockies seemed so foreign, so much younger and so different than my mountains. Before this trip, I had never seen the West and part of me wasn’t sure it was still there. Stories about the hills and creeks and people and animals that lived within them were terrifying and a little unbelievable.

From the plane, these serrated peaks already seemed dangerous. Touching down on the ground was no different. The gas stations and pawn shops in small towns near the national forest looked similar to what we had at home but here they were often situated on steep, rocky ground unlike anything I had ever seen. Almost immediately, I missed my deciduous trees. The conifer forests all around me were beautiful, but they were a stark change from the poplars and oaks I had at home. Comparatively, the western forests looked sparse and concise. 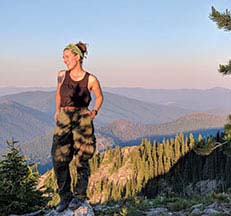 Rowan Brown worked in Idaho the summer of 2018 and wants to return as soon as she can. She’s now a senior at the South Carolina Governor’s School for the Arts and Humanities, where she studies writing.
View all posts by Rowan Brown →
ORDER BY MAIL