Posted on by Dan Noakes

Story and Photos by Dan Noakes

Those were the very words from my mouth as I bushwhacked my way through the Selway–Bitterroot Wilderness on the Idaho Centennial Trail (ICT). When I started, I didn’t know that fewer than twenty people had successfully through-hiked this trail. It’s extremely hard. In fact, bushwhacking is what you commonly do on the ICT, and I’m not talking about cute little bushes you can cruise by. No, this trial will eat you alive, chew you up, spit you out, and when you return for more, it will deliver what it delivers best: pain! You will be in pain the entire time as you travel the trail. How else can I put it? Don’t expect the ICT to be easy. It is not easy, it is gnarly. We are talking straight-up wilderness, and very, very remote wilderness at that. I heard from someone that Idaho is like the Alaska of the Lower Forty-Eight, so if you want a taste of the gnarliness our state has to offer, then by all means, the ICT is for you.

It extends more than one thousand miles, from the Nevada/Idaho border to Upper Priest Falls at the Canadian border. Created by Syd Tate and Roger Williams, the ICT was officially designated the Idaho state trail at the Idaho Centennial Celebration back in 1990. Since then, it has been, for the most part, forgotten and abandoned—yes, forgotten even by our beloved U.S. Forest Service.

It took me fifty-two days to complete the ICT, starting in late May 2018, which I later found out is not a popular time to start. Of course, “popular” is relative in this case, because it’s based on the roughly nineteen others who have successfully through-hiked it [for another account, see “Walk a Thousand Miles,” by Thomas Jay Oord, IDAHO magazine, September 2012].

The ICT’s southern end starts in the Owyhee Desert, which for the most part was fairly easy for me. The heat was not a problem in late May. But the Sawtooths were a different story. In late spring I had to deal with a lot of snow and high stream crossings. The most dangerous river I crossed was the South Fork of the Payette, which was fairly wide and the flow at peak levels. Afraid it would sweep me off my feet if I attempted to ford, I found a fallen tree a mile or two downstream that appeared crossable. The tree wasn’t big or stable enough to walk across, so I had to get on my stomach, hug it with my arms and legs and, while wearing my thirty-pound pack, shimmy my way across it slowly. 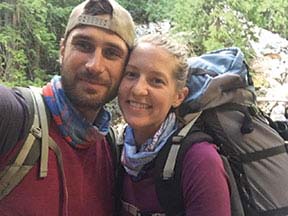 Dan Noakes is a animator by trade who runs an animation shop called Motifize in McCall with his wife Michelle. He creates animated videos for businesses of all kinds.
View all posts by Dan Noakes →
ORDER BY MAIL