Posted on by Loris Addington

Two Girls on the Lam for a Day

We crouched in the brush beside the road near Council, uneasily looking at an empty freight train. At the arranged signal, we bolted, crossed the road, scrambled up the bank, over a set of tracks, and belly flopped through the open door of a freight car.

Earlier that morning, my good buddy Kay and I had made our sandwiches, laid them out on clean bandanas, carefully tied the ends together, and then tied the bandanas to the ends of our sticks. Slinging our lunch over our shoulders, we walked a mile until we reached thornbush just east of the railroad tracks. We ducked under a barbed wire fence and stealthily worked our way into the thicket. It was one of several bunches of thornbush still left in the valley back then, in the summer of 1952, and it was a favorite hangout for transient men, better known in those days as bums or hobos. They would take the train up from the lower country and get off in Council for a day or two before moving on. But nobody was there today as we curiously examined the remains of their camp. Our school’s summer vacation was well under way by the time we came up with the idea of catching a ride on a train. In those days, whenever one of us got an idea for an adventure, the other one was always ready to go. 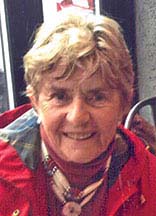 Loris Addington grew up in Council, which she remembers as “full of glorious freedom.” A finalist in the Miss Idaho contest of 1955, she left the University of Idaho to become a flight attendant for American Airlines. She married and had a son, Craig, in McCall. She finished her degree at Boise State, founded Van Go Tours in Portland, and is now retired, “again free to roam the world.”
View all posts by Loris Addington →