A Town and Its Ghostly Sibling

I have a long association with Samuels and Sam, two sibling communities that are namesakes of the same man. My mother was born and raised in Sandpoint, and for most of my life I’ve been aware of Samuels, a picturesque residential area about twelve miles north of Sandpoint and just north of Ponderay in Bonner County in the mountains of the Idaho panhandle. At 2,152 feet above sea level, it lies in a panoramic valley at the foot of the mighty Selkirk Mountains. Sam, on the other hand, is a ghost town at 6,493 feet above sea level in the equally scenic Teton Valley foothills along the state’s southeastern border. My husband Douglas and I first met Sam when we were camping in the area, back in the summer of 1979. The two places are connected by a founding father, Henry Floyd “H.F.” Samuels II. Over time, I’ve learned a few things about him and his two towns.

As a child, I spent many holidays at the Sandpoint farm of my grandparents, Nana and Pop Burt, so I was familiar with nearby Samuels. When I was a young adult, I would gas up my car at the Samuels truck stop on my way to my aunt and uncle’s house in Clark Fork. When my husband and I decided to build our home in Cataldo a few years back, we found a charming log cabin to rent for the summer on Upper Samuels Road in Samuels. It was then that my education on the town and on H.F. Samuels really began.

On the day of our move, we followed U.S. 95 north past Sandpoint and Ponderay, past the deep waters of shining Pend Oreille Lake, and crossed over the headwaters of the mighty Pack River to enter the sparsely populated Samuels area. Increasingly, we became aware of a feeling of being only a small part of a large and magnificent setting. Schweitzer Basin ski area, part of the Selkirk Range, lay off to the west. Up north towards Canada, larger guardians of the same mountain chain began to rise up, as if to challenge our entrance into their domain. The sun began to set as we turned onto Samuels Road. Colors of orange and gold sunset played with lingering cumulous clouds and mountain shadows to the west, while birch trees waved their greeting to the northeast, where our cabin lay.

It was pretty basic, but we were ripe for a summer adventure. Cold running water was piped from Sand Creek, which flows into the headwaters of the Pack River. If we wanted hot water, all we had to do was heat it on the hot plate. We had an indoor toilet of the composting variety. We also had an outdoor toilet if we wished to use it, of the two-holed variety. We took baths in the sun on our porch in the sunshine in a tub that had running water, in a manner of speaking. We filled a bucket, ran, and poured it in. We could have a hot bath if we ran really fast and poured while the water was still hot.

We did not consider that we lacked conveniences. We had a microwave, phone, and internet service. Samuels proper has a gas station, convenience store, and a very nice café with awesome views and a state-operated large-truck weigh station. It also boasts a western guest ranch, great fishing, canoeing, and rafting. The town’s current population is a little tricky to determine. According to the Samuels Post Office, there are eighty boxes on Samuels Road. Based on the U.S. Census Bureau figures of roughly 2.4 people per household in Bonner County, that would make the population of Samuels about 192. This figure doesn’t include anyone on the other side of the road, over by Walsh Lake, who might identify as a Samuels resident, or the houses on Upper Samuels Road where mail is not delivered, some of which are summer cabins. 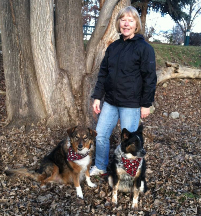 Eloise Kraemer and her husband Douglas were born and raised in the Silver Valley. Her first book, Across the Crooked Bridge, was a historical biography. She also wrote Idaho in Pictures and Poetry, two teen books of historical fiction, and a children’s story set in northern Idaho. Her next book, out for Christmas, is Beyond the Crooked Bridge. She and Douglas live in the mountains near Boise. They enjoy hiking, kayaking, photography, snowshoeing with their three dogs, and spending time with their family.
View all posts by Eloise Kraemer →
ORDER BY MAIL