Posted on by Ed Fischer

Watch Out for the Cops

Two days after a sixteen-hour marathon climb of Wyoming’s Middle Teton in the summer of 2004, my buddy Aric and I were still too whipped to do any hiking, so we decided to take a drive over to Idaho.  Neither of us Connecticut natives had ever been in the state we knew best for its top-of-the-line potatoes. From our motel in Jackson we made the easy day trip west to Victor, down through Swan Valley, and into Idaho Falls. There we entertained ourselves in a cellar the size of a football field chock-full of metallic junk for sale, and then outside at a lively flea market. But the prize attraction on this splendid afternoon was a gathering of kids—mostly high-schoolers and a few younger ones—at a road bridge in town that spans the Snake River.

The water below the bridge forms deep pools—deep enough, evidently, for the school kids to hazard leaps from on high. I say school kids, yet there was one older guy, a townie who looked to be his mid-thirties and had lots of teeth missing. Aric remarked that he appeared to have had a hard life and now seemed intent on clinging to his fading youth. He was an outlier to be jumping with this way-more-juvenile gang. He told us that members of the party took turns as watchdogs, positioned at each end of the bridge, looking out for cops. Condescendingly, he addressed me as “Pop,” which gave Aric a chortle (I was creeping up on seventy at the time). 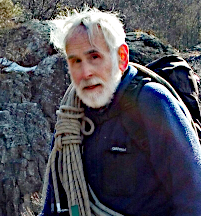 Ed Fischer is a retired research psychologist who has lived most of his life in Connecticut. His nonfiction has appeared in newspapers and literary journals and now, in IDAHO magazine.
View all posts by Ed Fischer →
ORDER BY MAIL