Posted on by Andrea Davidson

Photos Courtesy of the Davidson Family

On a sunny morning last January, I attended the gathering of Buy Idaho in the rotunda of our state capitol. There I met Kitty Fleischman, the publisher of IDAHO magazine, and we talked about the large photos of early Boise and stacks of her magazines arranged invitingly on a table. In the midst of enthused merchants displaying their wares, I felt a rush of pride and gratitude for my life as a fourth-generation citizen of our state. Davidson Service, an early mechanic/gas station, and Boise Wholesale Dry Goods were started by my ancestors. Surely, they would have been at the rotunda passing out calendars, maybe even shoehorns to entice the early settlers of Boise to come check out the goods they offered.

A few steps away was a table for one of Idaho’s most long-established businesses: Peasley Transfer & Storage, which was founded in 1896 with lots of mules and wagons ready to aid early settlers. Kit Herndon, whose mother, Janet, might be the oldest living Davidson in Boise, led the business for the past thirty years. Her grandfather, Mowbray Davidson, bought it in 1939. The Herndons recently sold the business to a family from Seattle that is honoring its tradition by keeping the name.

Janet’s husband Emmet rode his bicycle to work at the corner of Curtis and Franklin Streets in Boise until he was ninety years old. At about the same time, he hung up his racket at Boise Racquet & Swim Club, which he and Janet helped to found in the 1960s. 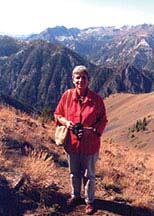 Andrea Davidson worked for many years as a travel agent in Boise and Grangeville, sending people around the world. Now retired, she enjoys traveling Idaho’s roads. Her business card says “Cheering Section/Owner” of Highlands Hollow, a restaurant and microbrewery in Boise, which she owns with her sister and her brother’s children.
View all posts by Andrea Davidson →