Such a Pretty Boy 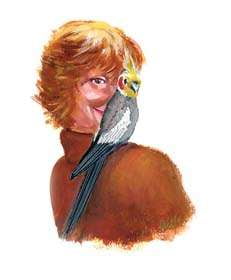 Posted on by Rita Branham Rodriguez

On a gray February afternoon, I’m in a room on the east side of my house when I hear a strange birdcall. Ringing as clear as a meditation bell, the unfamiliar call snaps me out of the cheerless mood I’m in.

Hurrying to the window, I scan the backyard, but see nothing. I look beyond my own yard to the tops of silver maples on the next street over. Two large birds perch on the top. I watch them closely, but when they fly away, they’re unmistakably crows.

In my own yard, I search the bare branches of lilac bushes, sift through the sour cherry tree, a favorite with birds, and hope for another call. As I shift my gaze to the right where the round Norway maple we planted ten years ago towers above the rest, I see a grayish clump between two upright branches. It looks feathery. Could it be a Christmas decoration that got away and blew into the tree? There’s no head that I can see. But I hear the strange, clear call again.

I decide not to move until I see what’s making that noise. I watch, hoping the feathery clump will come to life. Wind ruffles the front feathers. Bless you, bird, if you’re a bird, please move. Is that a gray tail hanging down? If so, it’s no ordinary tail. It’s long and graceful. Be something real and alive, I hope. Move. And when you do, I’ll be here to see you. 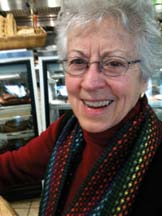 Rita Branham Rodriguez grew up in the Appalachian Mountains of Virginia, where storytelling is a heritage. She has written for Boise Journal, Boise Magazine, Cold Drill, and the Idaho Statesman. Rita is a founding board member of The Cabin, Boise’s literary center. She earned a degree in education with honors at Radford University, and then taught high school English and Spanish, as well as eighth-grade English for an American school in Venezuela. She lives in Boise.
View all posts by Rita Branham Rodriguez →
ORDER BY MAIL