Ten Toes Down in Idaho

I was spooning ladles of broccoli and cheese sauce on my four-and-a-half-pound Idaho Baker at a summer fun fest potato bar when I heard the lady behind me tell her friend (or mother, sister-wife, hairdresser, it wasn’t clear) how they were planning an August road trip to California so the kids could share churros with Donald and Mickey before “that dang school starts up again.”

“Why would anyone leave Idaho in August?” I mumbled to myself—and apparently to anyone with ears between me and the sour cream and grated cheese at the far end of the second banquet table. (My wife says I have one of those voices that “carries and carries.”) I was thinking of those tasty Indian fry bread tacos they’d be serving at the rodeo later in the summer and couldn’t help myself. Try to find a fresh one of those in the City of Silly Cartoon Characters.

Back in line for the huckleberry crisp and vanilla ice cream, my wife reminded me we visited Universal Studios last year—and the year before. Yep, that’s two years in a row. I know, I know, I’m not going to go into how that happened, but at the very least, I admit, I was an enabler and maybe even an accessory to the crime. (In my defense, think Stockholm Syndrome and Patty Hearst.)

The author and his wife on a roller coaster. Courtesy of Steve Carr. 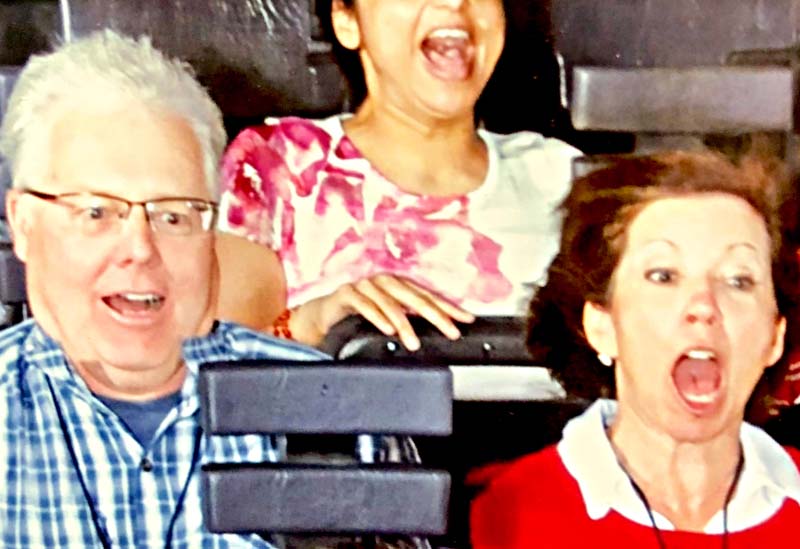 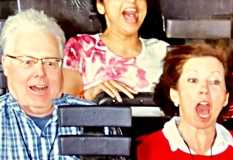 Both times, we ate the same mushy (organic?) corndogs, kibitzed with the same cartoon princesses, and rode the same ride that locked us into a splatter-stained chair, took us to a height approximately equivalent to the International Space Station, and dropped us, without warning, before stopping with our feet just high enough off the ground to keep our shoes clear of the vomit. We bought the overpriced and unnecessary pictures waiting for us in the souvenir room at the exit. You know, the picture snapped at the exact point during the “ride” when you are quite sure you are taking your last earthly breath?

I’ve put my foot down this year. Who needs to spend a bunch of money for what amounts to an adrenaline rush with an acid tummy chaser? We will stay here where we can comfortably put our feet on the ground and avoid most communicable diseases. I prefer to think the fact that Idaho does not have a massive theme park with rides that occasionally soil one’s knickers is a good thing. It frees us from long lines and exceeded credit card limits to do those spontaneous activities that allow for calm and meditative reflection. We Idahoans should know how to enjoy the great outdoors in all its quiet splendor, not to mention broccoli and cheese sauce on our potatoes.

So go enjoy your Idaho August before that dang school starts up again.

By the way, who wants to go white water rafting on the Salmon River with us next week? I put money down on four spots awhile back and it turns out our friends feel like they should make their house payment this month instead of the Dutch-oven-dinner- inclusive float trip. Act fast because I’m told the next available opening is August 2043. I’ll supply some unused barf bags I lifted from the plane seat pocket while returning home from said crowded theme park. The photo they take at Big Kahuna rapids, the one where you think you may drown, costs extra.

Since you asked, Steve Carr is a recovering attorney, who can be reached at scarr@prodigy.net.
View all posts by Steve Carr →
ORDER BY MAIL