Posted on November 1, 2019 by Margaret Benson

A Legacy of Hands, Hearts, and Tenacity

My introduction to Tensed began early one morning in February 1995. Alaska had been my home since 1973. Most of my family lives there. I had a horse farm close to Fairbanks and worked for the State of Alaska for almost twenty years. I loved living in Alaska and thought I’d never leave. But by February 1995, with fourteen feet of snow on the ground, the thought of retirement and moving south started to look pretty good. I think I was suffering from cabin fever.

Feeling my pain, my friend Lorna invited me to join her on a trip to Idaho, where she and her husband had property. A few weeks later, we were driving north on Highway 95 when we made a stop in Tensed. The sign at the edge of town boasted a population of 102. While in town, we heard about a small farm for sale about five miles out of town. We headed east on a bumpy dirt road, splashing though several muddy potholes. Compared to fourteen feet of snow in Fairbanks, a muddy road in February looked pretty good to me.

We turned into the driveway by the “For Sale” sign, crossing a culvert over a fast-moving creek. I gazed beyond the small log home and spied what looked like an orchard. I sensed this might just be it. And it was. The next year found me trailering horses down the Alaska Highway to my new home in Idaho.

Tensed is a small town located midway between the cities of Coeur d’Alene and Moscow, on the Coeur d’Alene Reservation. You probably wouldn’t take notice of the town while driving through, except for the 35 mph speed limit sign that directs you to slow down. It looked like a typical small town, nice houses with groomed lawns, a post office, library, and a couple small businesses. I wondered what it was that attracted the people who founded and settled in this town.

I came across an early document by Isaac Stevens that tells of finding 250 Coeur d’Alene tribal members on the camas fields. Hundreds of years before Highway 95, native people near and far gathered in this area every June for a great encampment. The women would collect enough camas bulbs to feed the whole encampment and a feast was held.

In 1873, President Grant ordered the establishment of the six-hundred-thousand-acre Coeur d’Alene Reservation in northern Idaho. By 1880, new wooden buildings were built near where Tensed now stands. This came to be the first “modern” town within miles around. It was named “DeSmet” after Pierre Jean DeSmet, a Jesuit missionary who was active in the Coeur d’Alene Nation. Tribal members were allotted acreage within the reservation. 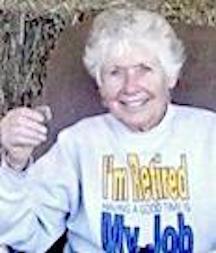 Margaret Benson grew up on a small farm in Pennsylvania, where she cultivated her love of adventure and animals. Riding and raising horses is her special love. At eighteen, she joined the Air Force to see the world and has been traveling ever since. She  currently lives in Idaho, enjoying retirement, her animals, and  frequent flyer miles.
View all posts by Margaret Benson →
ORDER BY MAIL