Posted on by Will Edwinson

The sun was hot that day, sending the temperatures into the nineties, and Buddy was enjoying the refreshing tepid water in the river swimming hole known as the “23.” No one knew exactly why this pool was called the 23 except, rumor had it, years ago someone had tied a stone to the end of a rope and dropped it into the pool. When the stone reached the bottom, the rope was marked, hauled up and measured. It was twenty- three feet to the mark. That’s when the legend of the 23 supposedly began. 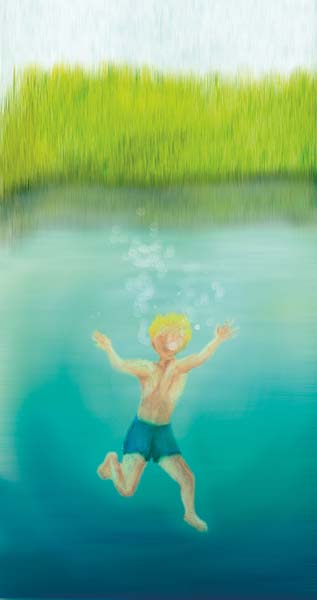 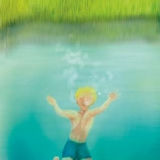 The 23 was the favored swimming hole of several pools along the Bear River in what was known as Black Canyon. Black Canyon got its name from the black rocks created by ancient lava flows, which formed fiord-like rock walls on each side of the river.

What made this part of Black Canyon unique was the canyon bottom. Standing at the rim of the canyon wall a hundred feet above the river, one could view a piece of God’s artwork at its best. The canyon bottom was formed by molten lava that had flowed, and later hardened, to form a flat surface similar to that of a giant patio. This patio-like canyon floor was approximately a mile and half long and five to six hundred feet wide. Scattered along this giant patio were several large holes that made up the various pools of water where Buddy and his friends enjoyed swimming. They varied in size from twenty-five to forty feet across.

There was a larger pool just down river from the 23 called the “60,” and though the boys swam there also, the 23 was still favored because it was somewhat smaller, which enabled the sun to heat the water to a warmer temperature. Because the water flowed so slowly through this section of Black Canyon, it was nearly stagnant. Not so stagnant that it became foul, but stagnant enough that the sun was able to heat some of the pools to a near tepid state.

Buddy was standing waist deep in the pool on a rock ledge about three feet below the surface of the water. It was about thirty feet across the pool and Buddy wondered if he could make it to the other side. He had mastered the dog paddle pretty well, but he had only dared venture a few feet from the safe haven of the edge of the pool. Although he felt he was ready, he had never mustered the courage to attempt a crossing. Today, he thought, is the day I should try it.

Buddy pushed off and swam a few strokes, then lost his courage, and turned back. One of Buddy’s older cousins, Dex, watched Buddy and decided he was going to make Buddy swim across the pool. Buddy didn’t like Dex very much; he had a mean streak in him that he vented toward Buddy whenever he had the opportunity. Being younger and smaller, Buddy was vulnerable to his taunts.

Dex moved around and began whispering to some of the other boys. Buddy noticed this and a sinking fear gripped him. He knew his cousin was up to no good, and he, Buddy, was to be the victim. It wasn’t long coming. Buddy looked up and saw Dex and four bigger boys walking toward him.

When they approached, Buddy asked, “What’s up guys?”

“I’ve been watching you, Buddy,” Dex remarked, “and I’ve decided the only way you’re going to get up enough courage to swim across the pool is for us to help you. A fiendish grin crossed his face. “So that’s what we’re going to do.”

Buddy’s fear heightened. “What are you going to do?” he screamed. Just then, two of the bigger boys reached down and grabbed Buddy under his armpits and lifted him out of the pool. Buddy struggled and screamed. “Leave me alone,” he shouted.
The commotion drew the attention of Mont and some of the other boys who had been sunning on the rock ledge.

“What’s going on over there?” Mont yelled.

“Nothing that concerns you, Mont,” Dex answered.

“They’re gonna throw me in the pool,” Buddy yelled.

“Who mentioned that?” Dex asked. “Did anybody say anything about throwing you into the pool?”

“You didn’t have to,” Buddy screamed. I know you, and I know that look on your face. You are gonna to throw me in.”

By this time the other boys decided to come to Buddy’s defense. Dex and his crowd were outnumbered. They soon realized this, and picked Buddy up and hurled him into the middle of the pool before he or his defenders could stop them.

Buddy landed in the middle of the pool with a splash. Down, down, he sank. His eyes were closed, and everything around him was black. I must be ten feet under, he thought. He panicked for a moment then regained his composure. He opened his eyes and saw daylight above him. He kicked himself to the surface where, much to his surprise, he remained calm and his paddling skills took over. With a combination of dog paddle and the overhand breaststrokes he had been practicing for weeks, he made it to the opposite side of the pool without any difficulty.

Mont walked up and wrestled Dex to the ground. Mont was older and much larger, so he was able to do this quite easily. “That was a dirty rotten trick, Dex, and I’m going to fix you good for that.” He twisted his younger cousin’s arm behind his back until Dex screamed in pain. “Don’t you realize Buddy could have drowned? What if you had thrown him too far and he had struck his head on a rock?” Mont was livid. There was nothing he would not do to protect Buddy.

“Let me up you big brute,” Dex screamed. “You’re breaking my arm!”

“If I ever catch you picking on Buddy again, I will break your arm, and maybe even your head,” Mont told him.
Mark and the other boys sided with Mont. What you did was kinda stupid,” they said. “He wasn’t that sure of himself, and he could have gotten into trouble, you know.”

One of the boys who threw Buddy into the pool spoke in their defense. “We wouldn’t have let anything happen to him. If we had seen that he was in trouble, we could’ve fished him out in time.”

“How do you know that?” Mark asked him. Things happen so fast sometimes that we don’t have time to do anything. It was a stupid thing to do.”

Mark turned to Mont who by now was sitting on Dex, still twisting his arm. “Let him up, Mont, I think you’ve made your point. I don’t think Dex will be bothering Buddy again for a while.”

Mont relaxed his hold on his cousin. When Dex got up Mont looked him straight in the eye. “Just remember what I told you,” he said. “You bother Buddy again, and I’ll fix you good.”

Dex was rubbing his arm trying to regain the circulation. He observed Mont with a new respect. He hadn’t realized until now, how strong his devotion to Buddy was. From this day forward, Buddy would see less of Dex’s taunts toward him.

In spite of the harrowing experience, Buddy was quite excited. He discovered he could swim the width of the pool after all. As a matter of fact, he spent the rest of the afternoon swimming back and forth from one side to the other.

When he arrived home late that afternoon, his mother asked how his day had been.

“I had a great day,” he told her. I finally was able to swim all the way across the 23 today.” He decided that if he wanted to continue having his mother’s permission to swim at the 23, prudence would dictate that he not fill her in on all the details.