Posted on by Dianna Doisi-Winget

August 10th, 2003, dawned clear and beautiful, promising to be yet another of the many memorable days of that summer when the mercury inched into the nineties or beyond. From my supreme vantage point atop Sandpoint’s picturesque Long Bridge, I could feel the restless excitement of the swimmers on the beach below as we all awaited the beginning of the ninth annual Long Bridge Swim. Soon came the deep bellow of the air horn and over three hundred eager bodies surged into the chilly, but pristine, waters of Lake Pend Oreille. Not just another race, the event has become the Northwest’s premier open water swimming event, attracting participants from all over the western United States. 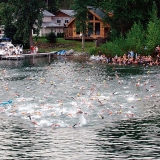 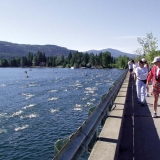 A pack of swimmers make their way in the early stages of the competition. All Star photo. 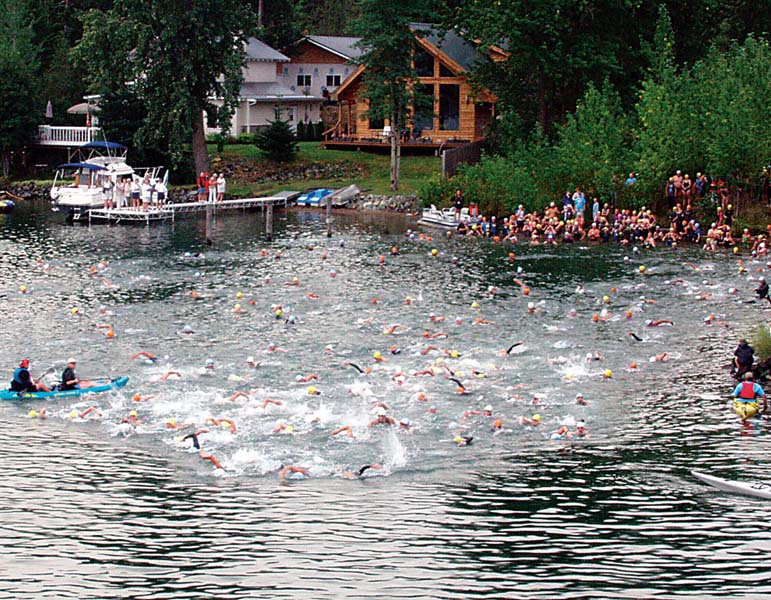 The unique element of this event is that spectators use the bridge to follow along with the competitors. All Star photo. 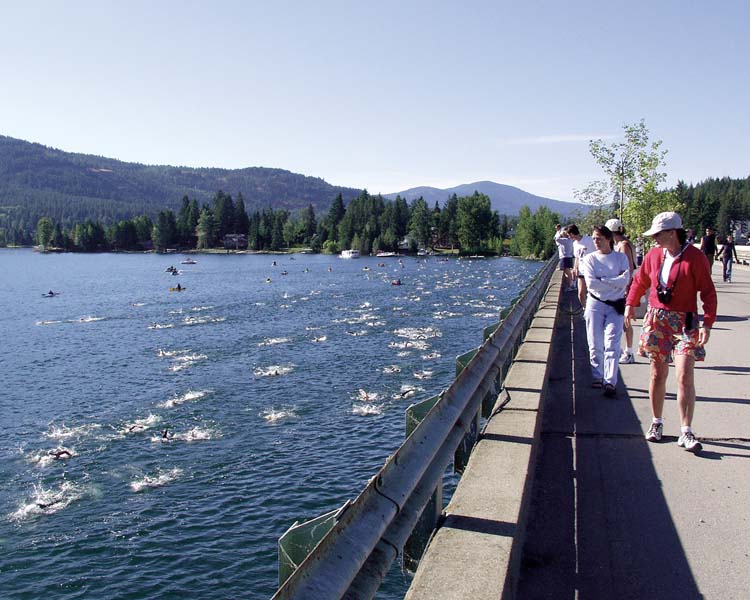 What makes this 1.7 mile swim so special? Several things. First and foremost is the attraction of Sandpoint itself. Long famous for its lakes, mountains and rivers, this little town of seven thousand also has established itself in the fields of music, art, and culture. But what really makes the Long Bridge Swim unique is the Long Bridge itself—actually two bridges side by side, one for traffic and one a pedestrian/bike path—which offers unsurpassed spectator viewing. After all, how many open water swimming events are there where you can stroll along with the swimmers every step of the way? And what a stroll it is.

Bridges have been a part of Sandpoint’s history for over 120 years, since the Northern Pacific Railroad built the first railroad bridge in 1882, connecting the area to the East and establishing Sandpoint as a bustling mining and timber town. And while mining and timber no longer claim as big a piece of the economic pie, there are still plenty of bridges. In fact, no matter from which direction you approach Sandpoint, you have to cross a bridge.

Anyone who enters Sandpoint from the south on Highway 95 will cross Lake Pend Oreille on the Long Bridge. The view alone has convinced many individuals to make this beautiful North Idaho community their home. And no wonder, with the lake’s clean waters beneath you and the jagged Cabinet Mountains rising against the sky to the east, it’s a view not quickly forgotten. To the north and west, rising sharply behind the town, is the Selkirk Mountain range with backcountry wilderness stretching some sixty miles to the Canadian border.

Newcomers are often enthralled by this view. In fact, the effect it had on one newcomer, Eric Ridgeway, is at least partly responsible for the founding of the Long Bridge Swim.

New to Sandpoint in 1991, the warm, enthusiastic Ridgeway dreamed of swimming across Lake Pend Oreille every time he crossed the bridge into town. Always a swimmer, and captain of the swim team in his junior and senior years of college, he just couldn’t get the idea out of his mind. So in the summer of 1994, with his wife and a friend kayaking alongside, his dream became reality. A local radio personality known affectionately as “Bashful Dan,” caught wind of what he was doing and encouraged everyone who happened to be driving across the Long Bridge to “honk at the crazy guy swimming across the lake.” Soon after, Ridgeway relates, “I had ten or fifteen people come up and ask if I’d let them know when I was going to do it again. I decided, since there was so much interest, why not just make it an event.”

Twenty were expected, but an astonishing seventy-eight participants showed up for the first official Long Bridge Swim in 1995. Every year the event’s popularity continues to grow, with a record 336 swimmers participating in 2003.

“I receive a lot of recognition for the event,” Ridgeway says. “But it’s grown so much bigger than me. It’s an event put on by the community. The real recognition belongs to the hundred-plus volunteers who make it happen.”

Another thing that makes the Long Bridge Swim so popular is that it’s good, clean family fun and open to swimmers of all ages and abilities. There are people like two-time event winner, John Weston, who qualified for the Olympic trials during his college days and finished last year’s Long Bridge Swim in 33:52, and people like little Moriah Langley, who finished the whole course in just over an hour and a half. Not bad for only nine years old.

Swimmers who want to participate are encouraged to practice long distance swimming first, but any who doubt their ability to stay the whole course don’t need to worry. Safety is given top consideration, and boats are always nearby, so a tired swimmer can hold on to a kayak for a bit to catch his breath, or climb aboard a boat at any point if needed.

Swimmers are invited to stick around after the event and enjoy food, music, prizes, and drawings. Everyone who participates gets an official Long Bridge Swim T-shirt, but as Ridgeway notes, “The real prize is the fun and satisfaction that comes from taking part in the healthy and somewhat crazy activity of swimming all the way across Lake Pend Oreille.”

This year’s Long Bridge Swim will be held on August 21st. For more information visit the event’s web site at www.sandpoint.org/longbridgeswim/. [/private]