The Hat [read this free]

Posted on by Les Tanner

A while back, as Kitty Fleischman and I were having lunch near IDAHO magazine’s office in Boise, a woman sitting at a nearby table came over.

“I am and I did,” I replied. “And you are?” I’d been retired over twenty years by then, and folks who were in their late teens or early twenties when I was teaching can change a lot in that time. She told me her name, which I recognized right away. She’d been an excellent student.

“I took some classes from you there in 1985 and ‘86,” she said. She had to remind me of the particular classes, and we chatted for a couple of minutes.

“So what was it that caused you to remember me?” I asked, assuming she would say something like, “Your chiseled good looks,” or, “Your charming smile.” Okay, a guy can fantasize once in a while, can’t he?

“The hat,” she replied with a grin. “Who can forget that?”

The hat. It was always the hat. Sheesh.

When I was kid and we were living in California, I should have worn a hat and long-sleeved shirt all the time. Of course, I didn’t. Kids don’t do “should.”  The sun is delightful and warm and necessary to life on this Earth, but it can be somewhat unkind to the skin of such a person as I was then: red-headed and freckled. Sunscreen in those days consisted solely of white stuff—zinc oxide, was it?—that we put on our noses. I’m still paying for the lack of good old SPF 30 back then. The sun is also unkind to folks who don’t have freckles or red hair. Or no hair at all.

I did wear hats on occasion, of course. The ones I wore most of my early life were of the ball cap variety, with the bill in front, as was the custom then. It wasn’t until we moved to North Dakota that I found I needed more than just a ball cap. Various types of headgear made their debut in my hat collection there. I took up hunting and ice-fishing that first fall and winter, both of which activities demanded warm clothing and headgear, and all variety of stocking caps and ski-masks joined my wardrobe. We lived just a few blocks from the college where I was teaching, and that winter I wore a Russian Cossack hat to school. It was grey and elegant-looking. I think I still have it, but I haven’t needed it here in Idaho. I also had a blue beret that I wore for a while, too. 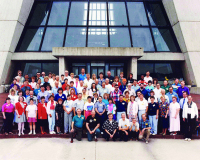 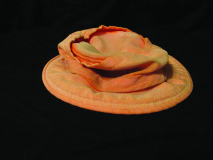 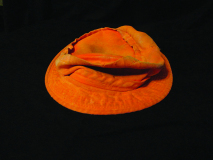 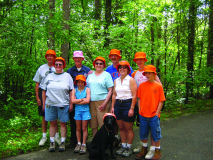 Your task: find Les at this conference. Courtesy Les Tanner. 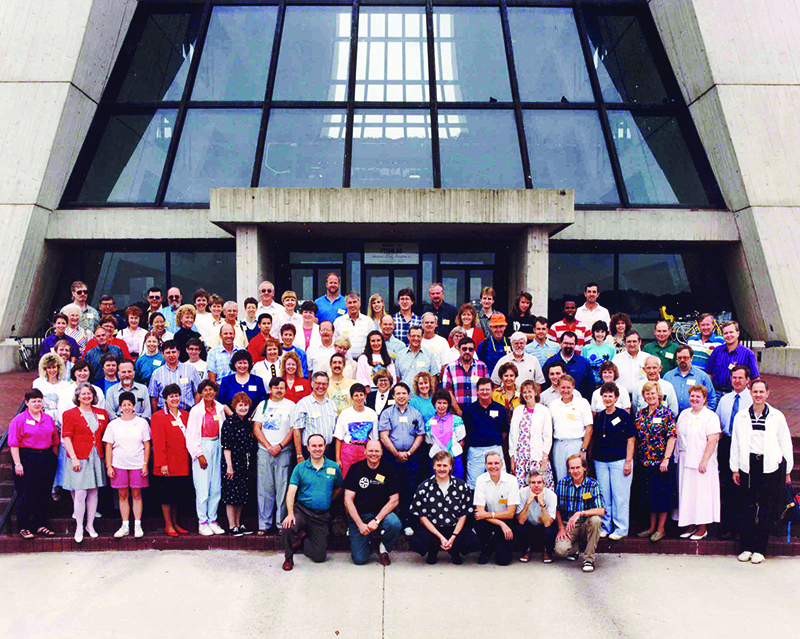 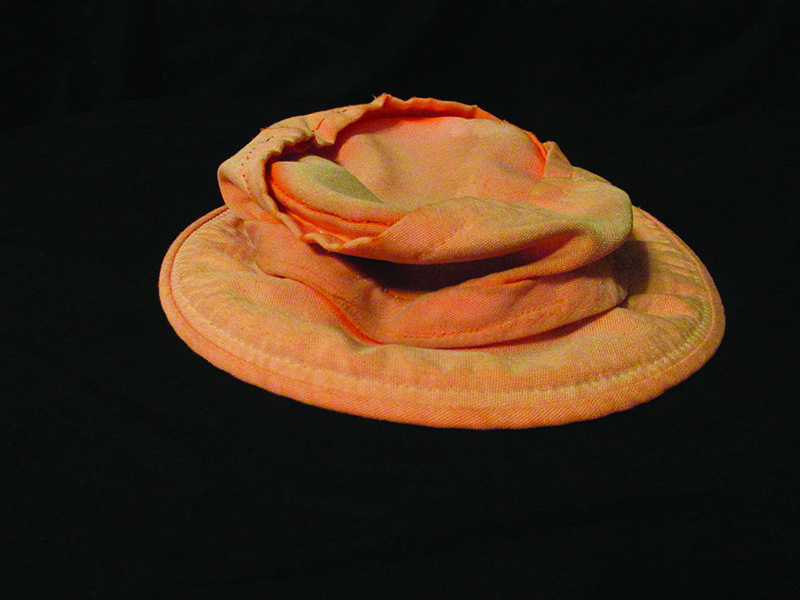 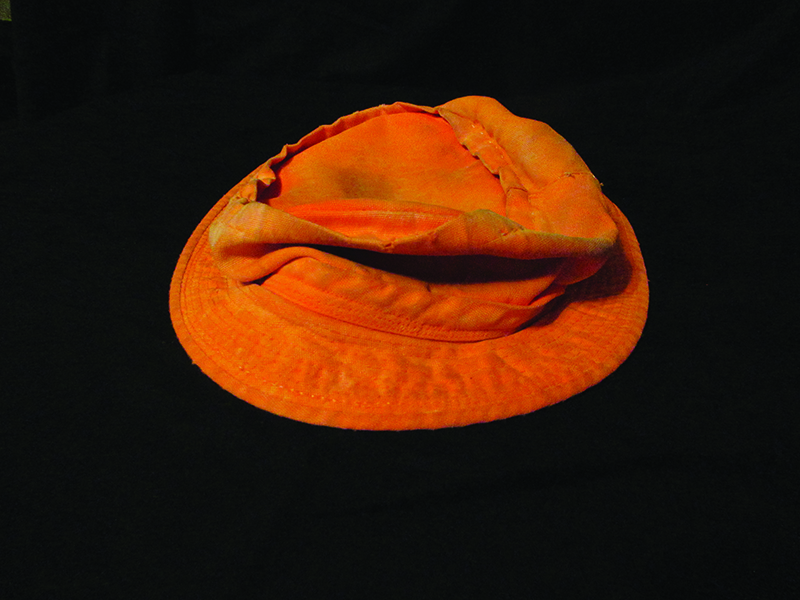 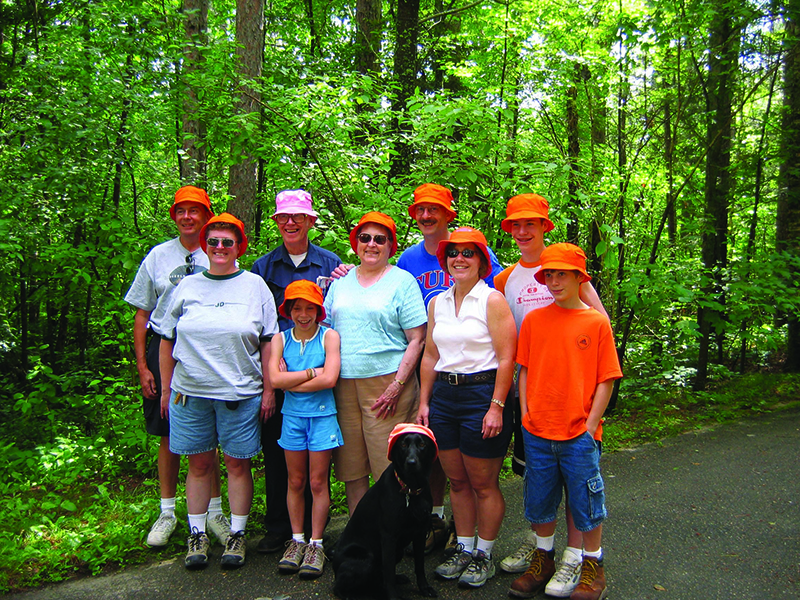 My outdoor summer activities included fishing and playing softball, during which my ears and the back of my neck needed shade. Initially, ball caps helped, but my favorite topper came in the form of a gray hat that my father-in-law had worn for many years. It was beat-up and not the cleanest chapeau but having long ago given up the notion that I needed to be well-dressed (no matter what the occasion), this big floppy hat became my companion during most of my outdoor adventures. Up to that time, the only such activity in which I still wore a ball cap was softball. That gray hat was perfect cover, which suited me fine, primarily since I didn’t mind looking ridiculous, but it didn’t work well on the diamond. I failed to see the ball at critical times, for example, and that bothered me. It bothered my teammates even more.

Sadly, someone swiped the hat after I set it down on the counter at a hotdog stand following a game. I never did find the culprit, who undoubtedly didn’t mind looking ridiculous either. My teammates were no help at all in searching for the thief. Neither was my wife. I’m not sure why.

None of those, however, became the hat.

It was another change of scenery which led to a further change of head coverings. It had been many years since I’d been able to go stream fishing for trout, so about the very first thing I did here in Idaho was to buy a fishing license. It didn’t take long for me to hit the local streams or to realize that the sun could be hotter here than in North Dakota. Acquiring the right hat was a necessity, and I found a dandy one designed just for fisherfolk. It had a wide brim, the front of which was nice and long, providing shade to my face. But the back needed something more, so I sewed a drape of brown camouflage material onto it. The first time I wore it, the driver of a passing car honked and waved as I was walking down to the river. I had no clue who the person might be. An hour or so later, I met him upstream.

“Oh, you’re a guy!” he exclaimed. “From the road, that drape on your hat looked like long brown hair, and I thought you were a woman.”

As soon as I got home, I replaced the drape with green nylon.

That’s still not the hat, though.

Our first fall here, in 1979, I got the opportunity to fish the South Fork of the Boise River. Unhappily, this trip coincided with the opening of deer hunting season and I spent a good part of the day flinching whenever I heard a rifle shot. I had no clue how close the shots were, but what sent me home was the sight of a rifle-toting hunter directly across the river, walking in the same direction I was. He saw me and waved. At least he knew I was there. But I wasn’t for long. I had my gear packed and was on the road in less than fifteen minutes.

Before I went out again, I purchased a red hat and red sweatshirt, which became my fishing garb for the next year or so. Then one summer day when I was on a fishing trip up north, I stopped in at a sporting goods shop in McCall, where I spotted an orange hat. It was brighter than the red one, which had begun to fade, and was of the same style, so I bought it. In fact, I bought two. That was in the early 1980s, and I still have both. I still wear both, too, changing to the “freshest” one now and then.

Those hats combined to become the hat.

For some reason, I began wearing one of those hats whenever I went out, whether it be cycling to school or shopping or playing tennis or just walking around town. It had its uses besides keeping my pate from getting sunburned, a primary one being to allow my wife, Ruby, to locate me when we separated in the mall or if I got lost at the airport.

On the way back from a trip to Aberdeen to visit Ruby’s parents, I put the hat upside down on the seat between us to catch the shells of sunflower seeds I was chewing. We stopped at a sporting goods store in Nampa to look at racquetball shoes, and as we got out of the car, I grabbed my hat and put it on. Inside the store, I asked a clerk about shoes, and as we
talked, I took my hat off. Two things happened at once: Ruby hurried to another part of the store, and I saw something fall. At first, I thought it had fallen from the ceiling, but when I saw a second thing fall, I realized why Ruby had abandoned me so quickly. I was standing there with a small volcano on my head, and it was beginning to erupt shells. I nonchalantly put my hat back on and continued my discussion with the clerk—who, keen salesman that he apparently was, didn’t crack a smile.

Prior to attending grandson Austin’s sixth grade class to talk mathematics, he approached me just before we left for school.

“Don’t act weird,” he replied. Then he added, “And please don’t wear your orange hat.”

Oh, do I love a challenge.

When we had a family reunion in 2006, Trudy, our daughter-in-law, bought a whole bunch of hats to take along. When the time came for us to have a family photo taken, she produced the hats. There
were ten in all and the photo showed everyone, including their black Lab Coala, sporting an orange hat. Everyone but me, that is. She’d bought a pink
one for me.

Over the years, the hats have become a bit tattered but a needle and orange thread have fixed much of
that. I searched for dye of the right color to brighten
up the hats but learned it was not available. There
does exist paint to be used on cloth, so one of the hats has been rejuvenated to some extent. The other, which
I have designated as the one to follow Ruby’s instructions, remains its
faded self.

Of course, during my lifetime I’ve worn other types of hats: A dunce cap in grade school (not really, but I spent a lot of time sitting in the corner); a helmet in basic training and on Army maneuvers in Texas; a red-and-white Santa hat at Christmas time; a mortar board at graduations and in academic processions.

But of all my head coverings, only one will be with me forever:

Les Tanner is shown here with his late wife, Ruby, to whom he was married for more than sixty years, and who also was on the staff of IDAHO magazine. When Les, a retired teacher, isn’t working on the magazine's calendar, proofreading, fishing, writing, playing pickleball, or pulling weeds, he’s out looking for Jimmy the cat.
View all posts by Les Tanner →