Lured Back by the Roar

Story and Photos by Scott Kunau

“You!” Ron “Mad Dog” Bolton barked at me during the Idaho Regatta’s Friday night test-and-tune in 1981. “Borrow that helmet and that racing life jacket, and come on. You’re going for a ride.”

The ride he meant was in the K-9 Kelron Racing Special—one of the hottest flatbottom, super-charged race boats ever to grace the regatta. That year, his boat went on to win the coveted Mink Coat for the time that is closest to, or surpasses, the world record for a racing class (his class was the K-Racing Runabout). I suited up, climbed into the boat and sat on the floor. Ron told me to brace my foot against the metal housing that held part of the propeller drive and hold on to the steering column. This was awkward, but at least I could still see all around me. He turned the key, the engine purred to a roar, and we were off. The ride lasted roughly three laps around the course. Going down the front and back straightaways, we hit near top speed of about 140 m.p.h. Ron backed off in the corners just like he would in a real race.

I think it’s likely I’m the only reporter who ever rode in a K-boat at race speed at the Idaho Regatta. It was one of the most exciting rides I’ve ever had and one that I wrote about in a boat racing magazine soon afterwards. After that ride with “Ronnie” (as he was known to many), I was hooked on boat racing, speed, loud engines, power, and even the smells of racing fuel. I wanted to buy, own, and drive a race boat—although I’m not sure that item will ever be ticked off my bucket list. 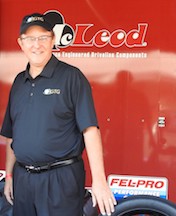 Scott Kunau is a former newspaper reporter and photographer and magazine editor. He lives in Star, and runs a nationwide information technology company, but he finds time to photograph boat racing and NHRA drag racing and to take care of his Saint Bernard. He is a member of the Idaho Regatta Committee.
View all posts by Scott Kunau →
ORDER BY MAIL