Posted on by Clint Barg

Story and Photos by Clint Barg

I’ve been attracted to climbing for as long as I can remember.  The first time I laid eyes on an Idaho peak up close, I was hooked. It was Heart Mountain in the Beaverhead Range, and I instantly knew the high country was where I belonged. Was it the unobstructed view that made me long for the top, or perhaps the personal gratification I’d feel after reaching the summit, or the animals I might see, or the physical and mental challenges the climb would provide?  Actually, I’ve found that the answer is different every time I climb—and the best part is, I’m never wrong.  The high country is where I’m the happiest and, lucky for me, there’s a lot of it here in my home state.

I grew up in the eastern Idaho town of Dubois and in my earlier years, before the advent of Google Earth, YouTube, and online research, I primarily just picked a route that looked good and went for it. The allure of the unknown literally pulled me to the top—although my first attempt at the 10,422-foot Heart Mountain taught me a valuable life lesson: how to fail yet never give up on my passion. The route I chose led me to a spot where I was “cliffed out” (stuck on a cliff and unable to go any farther) about a thousand feet from the top. I was alone, and common sense convinced me to turn around.  I’ve climbed many peaks since then, but have yet to summit this beautiful mountain.

When I tried to summit Heart Mountain in 1986, I was twelve years old and didn’t already know the best route to the top because I was, and still am to some degree, an impulse climber by nature. I love spending time in the mountains and often find myself being lure  d up some ridge to get to the summit. These days, I’m generally much more focused and frequently use the technology I have at my fingertips to survey all sides of a mountain I intend to climb. While this aids me in finding the best route, I must admit it takes some of the romance and mystery out of the ascent.  Even so, as I get older and more responsible, I tend to put preparedness ahead of recklessness. 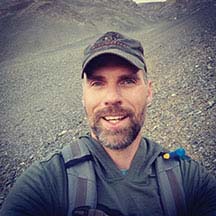 Clint Barg lives in Boise and grew up in Dubois. An avid outdoorsman, he spends a great deal of time in Idaho’s mountains each year, taking photos and writing about his adventures. He worked for Picabo Livestock in the 1990s and has worked at Micron Technology the past eighteen years. He and his wife have two boys, who also enjoy the great outdoors.
View all posts by Clint Barg →