The Bald Eagles of Coeur d’Alene

Posted on by Ray Harwood

An Awesome Winter Spectacle at the Lake

To many bird-watchers, the bald eagle carries a mystical aura, similar to the mythical thunder bird or phoenix of antiquity. I recollect seeing only a handful of the elusive predators when I was growing up and we vacationed in Coeur d’Alene, although my first encounter with one was intense enough to remain forever etched in my mind. On an early fall morning during a canoe trip when my brother and I were young, we paddled along Lake Coeur d’Alene’s shoreline, where the trees glowed bright red and gold. Our paddles sent us streaming through twirling twigs and leaves on the clear brisk water, passing a burly half-submerged log, and into an isolated boulder-and-brush-lined cove. As the sun uncovered the forest’s darkened shadows, our eyes caught sight of an epic battle unfolding, first near the ground and then overhead, which took away our icy breath.

With the precision of a guided missile, a massive bald eagle bolted from a  pastel gray sky trimmed with backlit clouds to collide talons-first into the unsuspecting shoulders of a large waterfowl. Amid a burst of feathers and an explosive swirl of dusty sand and dirt, the two locked in mortal combat on the cold ground. It was a jaw-dropping scene that probably lasted several seconds at most. The other bird, a duck, struggled to get free but the eagle, in his contrasting colors of  black and white, laboriously climbed toward a large tree’s upper bows, straining to flap one massive wing at a time. The duck nearly freed itself several  times, but then went limp either from fatigue or death, and the two entered the forest’s sprawling canopy. In quiet disbelief, we maneuvered our canoe to a more strategic vantage point, but the birds had disappeared into the dense tree cover as quickly and mysteriously as they had appeared. Dumbstruck, we paddled away. 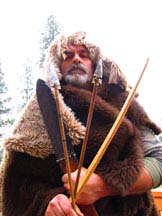 Ray Harwood has been a woodsman and amateur naturalist as far back as he remembers. As a boy, he spent a lot of time in wilderness areas and learned many survival skills. At California State University Northridge, he studied wilderness  technology and related subjects and has authored articles, books, and newsletters. He and his wife have two grown sons. Now retired, Ray lives in Coeur d’Alene.
View all posts by Ray Harwood →