Posted on by C. Eugene Brock

Loyalty to the Other Side of the Tracks

In 1942, my family lived on Nampa’s North Side, near my paternal and maternal grandparents. The friends I made all came from a core area of several blocks. We knew other kids on the fringes of that area, but they were really not a part of our group. I hesitate to call the North Side Kids a gang, because we weren’t, although we did get up to mischief sometimes.

I suppose during my early years I didn’t register a social difference between the North Side and the South Side of town, divided by the railroad tracks. As I grew older, I began to realize that the houses in the south were nicer and the cars newer, but it didn’t really matter to me. Looking back, I guess my North Side friends did think we were tougher than kids from the South Side. But none of that mattered much to me, at least not until our family moved to the South Side.

World War II sparked many jobs associated with national defense and my dad traveled to get the work. In 1942, he went to Salt Lake City, while my mom, sister, brother, and I lived with her parents on N. 14th Street. I was about five or six, and I remember all the lights being turned off during air raids, when the sound of sirens filled the night. I trembled in fear that the bombs would come any minute. After Dad returned from Utah, our family had our own place on the North Side for a while. I started first grade at Lakeview Grade School, but we were only there for half of the school year. We moved to Bend, Oregon, and then moved back to Nampa in the fall, and then my folks decided to go to Spokane while Dad worked at Farragut Naval Training Station on Lake Pend Oreille in northern Idaho.

The constant moving was not good for my schooling, so my parents decided it was better for me to live with my paternal grandparents. This was 1943 and the war was going full blast.

My grandparents’ house was small, maybe four hundred square feet. It contained a kitchen with a wood stove, a front room that also served as a dining area, and a non-partitioned bedroom. There was no indoor plumbing. Water was carried in a pail to the house. The outhouse was a couple hundred feet from the house. The exterior of the home was tarpaper and shingles. A dirt basement was for storage of canned goods and non-perishable food items. The door was heavy to lift and there were black widow spiders and other scary things, so I never ventured down there. Two large maple trees and a willow tree grew in the yard. The old house stood for many years and after my grandparents died, we took to calling it “the old tarpaper shack.” 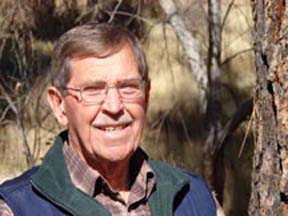 C. Eugene Brock worked thirty-two years for the Forest Service, the last twenty of which were as a district ranger on four districts. A University of Idaho graduate, his first book was Snapshot in Time, a repeat photography study of the Boise National Forest. In conjunction with the Valley County History Project, he wrote another book and collaborated on two others. Gene and his wife, Linda, live in Boise, and head for the hills as often as possible.
View all posts by C. Eugene Brock →
ORDER BY MAIL