Posted on by Wayne Fuller

When I was a young child, I wandered away from home frequently. I was the eighth of nine children, and my mother often delegated one of my six older sisters to try to keep me at home. Fortunately, crime was infrequent in our small town of Buhl,  although hazards were abundant. My objective was not  to run away from home but  to explore, to look for fascinating discoveries. I suppose I was curious, but if I put myself at risk, I also seemed to have a cat’s nine lives. Even so, my adventure with the settling pond could have lost all those lives.

The settling pond was located in the center of the city park, about six blocks from our house. The local Sego Milk factory emptied its wastewater into a small ditch about a mile from the park. The ditch carried the wastewater through a residential area and down to an oval-shaped  collecting pond. Cattails and water plants grew in the shallow end of the pond and around it grew mostly willow trees. At the deep end of the pond, a short arched bridge spanned a chute where the water dropped down to a grate and to an underground sewerage pipe. At the deep end and close to the bridge was a round iron wheel which, when turned, regulated the flow of the water from the pond into the chute. This wheel was chained and locked.

By the time I was about five years old, in 1939, I had already explored the neighborhood, including a car repair garage, a nearby lumberyard, and the local fire station in the city hall. I was fascinated by the fire trucks with all their hoses and equipment. I managed to sneak a peek at the firemen’s living quarters and at the pole they would slide down from where they stayed. One fireman offered to show me jail cells adjacent to the fire station. I followed him through a dark underground corridor to see the cells but declined his offer to go inside one. All of these close-to-home places excited my exploring instincts. 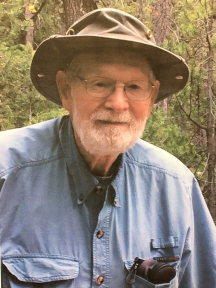 Wayne Fuller was born and raised in Buhl and is a retired district judge. His articles have appeared in several law journals. He and wife Margaret, a well-known author of Idaho trail guides, have five adult children and seven grandchildren. Since 1996, Wayne has served as a volunteer attorney to assist low-income and elderly persons with civil cases. He resides in Weiser and at age eighty-nine still hikes from his summer cabin in the Sawtooth Range.
View all posts by Wayne Fuller →
ORDER BY MAIL