The Twelve Junipers of Wapi

Posted on by Will Peterson

Twenty years ago, the Craters of the Moon National Monument, so long confined to forty-five thousand acres, was extended by executive order to 750,000. It was the Big Lonely: elk, deer, pronghorn. A wolf or two. Wild birds from all over North America. And if you went in May and June, the wildflowers were going crazy. Bitterroot bloomed like a prom girl’s orchid. Rivers of scarlet monkey flowers flowed between the cinder cones.

In 2005, when the Great Rift Science Symposium was held at the Idaho Museum of Natural History, I convinced historian Tom Blanchard, who had helped organize it, and photographers Tim Frazier and Roger Boe, who had contributed photographs to it, that it was a positive loss if they had not seen the Old Junipers. The Rocky Mountain juniper that grows under Old Juniper Kipuka (a Hawaiian word related to “tabu,” so I use that spelling instead of “kapuka”) in the very heart of the intimidating Wapi Lava Flow is the oldest and tallest in the known universe.

On the day we went, meteorologists forecasted light wind for the Snake River Plain, but that’s a variable concept, like forecasting waves in the North Atlantic. When we rendezvoused  at the southeast entrance, the wind was blowing tumbleweeds past us. The information kiosk advised water, food, a full tank of gas, and high-clearance vehicles with 4WD. It didn’t mention steel-belted radials but should have: lava rock along the road into Wapi Park can shred tires. A two-track veered south towards Wapi Volcano. We climbed over three-foot-tall lava tubes only to dive into alkali washouts. Like riding a mechanical bull. I glanced in the mirror to see a pickup pitching and yawing behind me, as if at sea. I cracked  the pull-tab on an India pale ale and the jeep staggered  up another lava tube. The wild brush danced around me. After an hour, the cinder cones of Wapi Park loomed ahead. The road got worse. 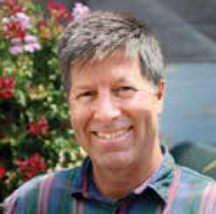 Will Peterson is the author of five books of plainsong poetry. His novel, Crawl on Your Belly Like a Man, set firmly in Idaho, was published in 2012 and his book with Roger Boe, The Flows: Hidden Wonders of Craters of the Moon National Monument and Preserve, appeared in 2019. Will owns Walrus and Carpenter Books in Pocatello.
View all posts by Will Peterson →
ORDER BY MAIL