Those Were the Days

Posted on by Ted Trueblood

Jack Trueblood, the son of late Idaho conservationist and outdoors writer Ted Trueblood, recently emailed an article written by his father about a 1954 fishing trip on the Weiser River. First published in 1980, in a newsletter of the Boise Valley Fly Fishers, “It is a good story that makes one think about what we have lost,” Jack remarked. The story’s setting near the small, century-old Galloway Diversion Dam is the site of controversial studies now aimed at building a much larger dam on the river. This reprinting is with permission of the Ted Trueblood Collection at Boise State University Library.

Those were the days, my friend; we thought they’d never end.” I liked that song.

In 1954 the Weiser River was running clear when the spring chinooks turned into it from the Snake, a rare thing. Much of the drainage of the Weiser had been devastated by abusive logging and grazing, and when the hard rains came or the snow melted quickly in the spring the red mud flowed into the river and I never saw the Weiser high and clear. Streams in the wilderness may be up and flowing through the willows and yet be so clear you can count the pebbles on the bottom. But they know not the cow and bulldozer.

We got the word from Fred Einsphar on May 30. He had a ranch along the river from about halfway between the town and Galloway Dam, and he was a sportsman. Herb Carlson, Clare Conley, and I were there early the next morning. There were no other anglers.

Herb and Clare had spinning tackle. I had my nine-foot, five-and-a-quarter-ounce Winston and a three-and fifth-eighths-inch Hardy Perfect reel filled with backing, monofilament, and a shooting head—my steelhead tackle. I intended to use nothing else. I believed that salmon would hit a fly as well in Idaho as in the tidewater pools of the Eel and this was the chance to test my theory. 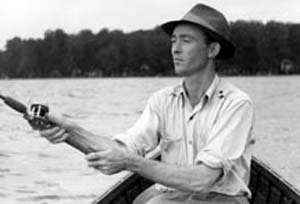 Ted Trueblood was born in Boise in 1913 and died in Nampa in 1982. An outdoors writer and conservationist, he edited and wrote for Field &Stream magazine for more than four decades, wrote several books, and won numerous awards for his lifelong advocacy on behalf of Idaho’s environment, including an important role in establishment of the Frank Church–River of No Return Wilderness.
View all posts by Ted Trueblood →
ORDER BY MAIL