What on Earth Is Out There?

Story and Photos by Jon Mills

The distant rumble of an all-too-familiar summer storm approaches from the west. I take a few steps outside my place near Jerome and look to the southeast, to judge how high the clouds are by the amount of light being reflected from the radio towers on the butte. The faint red glow tells me that lightning is more than likely hitting the ground. Another two rumbles that sound as I walk back into the house to grab my camera confirm my earlier thought. I decide to grab the camera, umbrella, and a jacket and walk onto the field rather than driving, as I am most likely working against a quickly shrinking timetable. With gear in hand, I head out and am instantly greeted by the cool, musty smell of rain being driven my way by the breeze.

Not far from a shed, I set up the tripod and camera and look to the west. The shed is a backup to my umbrella, in case it begins to rain harder than expected. The flash of a thunderhead due west assures me that I am in good position to capture what I’ve set up for. Seconds after I release the shutter for the first shot of the night, another cloud lights up the sky with brilliant white light. Got it. My heart rate begins to speed up slightly as the excitement of capturing this amazing force of nature wells over me. I exclaim aloud, “This is going to be a good storm!”

The beautiful storm I have been photographing seems to be indecisive on its path through the area, which causes excitement and indecision in me. As one very energetic thunderhead roams to the north of me, another sporadic yet far more photogenic storm approaches directly from the west. Like a child at Christmas unable to decide which present to open first, I keep turning my camera back and forth from north to west. The thick, humid air turns to a light, cool rain as I finally decide to keep my camera pointed west, because the nearby house and trees give a better foreground and sense of scale to the photos. I pop open the umbrella and hold it over myself and the camera. The initial adrenaline has worn off and with a cool head I get down to the basics of photography and the task at hand.

After two more strikes are captured, I review the exposures to make sure everything is in balance. I turn back the aperture slightly, open the shutter, and wait for the next strike. A flash is followed shortly by the crack and I shake my head, knowing that the image will be blown out, as it was far too bright for my current settings. I make another aperture adjustment, release the shutter again, and look to the west. Upon a quick mental review of the camera settings, I suddenly realize just how bright the last lightning strike was. I race through my childhood memories of counting the seconds between flash and thunder. “Five! That’s a mile, right, Mom?” 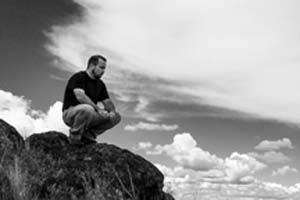 Jon Mills first came to Idaho in the fall of 1991 and has lived here ever since. Born February 3, 1981 in Santa Barbara, Jon has always loved the outdoors and taking pictures of it. Just a few years ago, his picture-taking took a turn toward the professional side and has been progressing steadily ever since. More of his work can be seen at facebook.com/jonsviewphotography.
View all posts by Jon Mills →
ORDER BY MAIL