Posted on by Jerry W. Davis

Could the Dream Be Real?

I noticed long ago that arnicas never grow alone, always in groups. To my mind, these large, bold, yellow blossoms—which are common throughout the lower-elevation pine forests of Idaho and stand out, easily catching my eye—are like villages or even small arnica cities.

Over the years, I’ve actively searched out these communities, believing that somewhere in my travels I would happen across a massive arnica city made up of thousands and thousands of blooms, as opposed to the patches of from twenty to two hundred flowers I normally find. This arnica city would be so extensive it would cover acres and acres of ground, and the bright yellow flowers would shimmer like a city of gold.

It’s as if I’m searching for the fabled lost city of the Spanish conquistadors, El Dorado, which translates to “the golden one.” But like those conquistadors of nearly five centuries ago, it may be I’m chasing a dream. 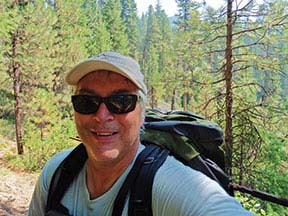 Jerry W. Davis was raised in a small town in northern Wyoming and moved to Idaho in the 1980s. He considers himself an amateur naturalist, and enjoys writing first-person essays on his observations of nature. Employed as an environmental health specialist, Jerry lives with his wife in Boise.
View all posts by Jerry W. Davis →
ORDER BY MAIL