A Nerve-Wracking Flight in Central Idaho

“OK, now we’re going into aircraft carrier mode,” our pilot said. I peered through my Plexiglas window and saw nothing but forest and jagged hilltops below.

As he adjusted a wheel in the floor between our seats, he began to recite his landing checklist aloud: “Fuel on both, trim is set, cowl flaps closed, twenty-degree flaps, airspeed eighty knots . . . ”

Our craft dropped lower and lower. Lowered to in between two rocky cliffs. Still, our pilot kept us on a steady descent. A jagged ridge on the shoulder of a mountain threatened our right wing tip as we passed by.

Getting nervous, I leaned forward to look over the dash for a better view out front. At last, a small grassy clearing came into view. It didn’t look very big, or very smooth, and there were trees at one end, a creek at the other.

“Sit tight,” our pilot spoke into my headset. “We’re going to buzz it once for moose or elk.” My stomach flipped as we dipped lower and skimmed the surface of the clearing below. Sure enough, we interrupted the quiet grazing of a huge cow moose, which trotted indignantly off into the woods with her head tossed high over her shoulders.

Accelerating, and dipping one wing sharply to the left, we circled and made another approach. “Are you ready?” he called through the headset.

With white knuckles, I nodded, and the first wheels touched the ground. Busy with steering and braking, my crusty old former Marine Corps fighter pilot didn’t notice my apprehension.There, the third wheel is down. After a bumpy ride over gopher holes and rocks, our trusty aircraft rolled to a stop just short of the clump of trees at the end of the runway. 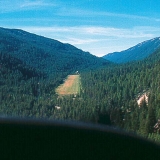 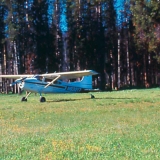 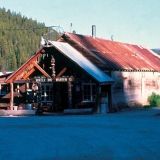 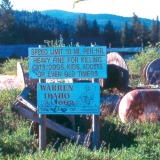 An airborne view of Johnson Creek Airstrip in the Frank Church-River of No Return Wilderness. 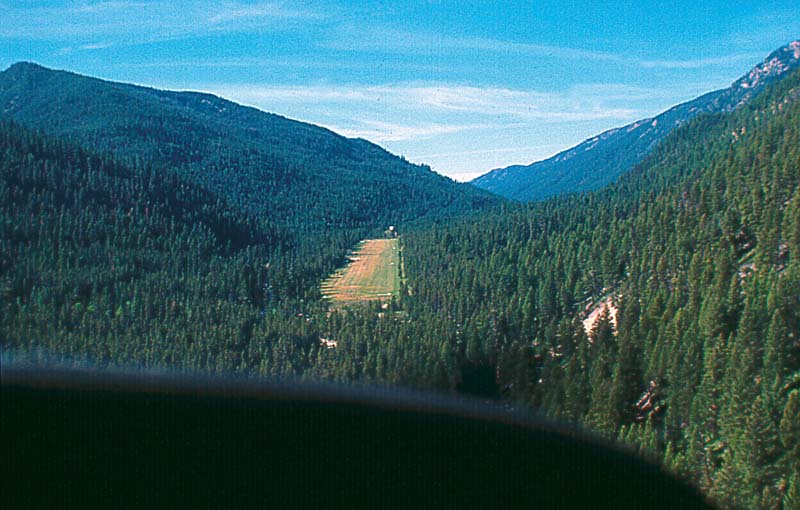 The authors’ airplane parked at the Chamberlain airstrip. 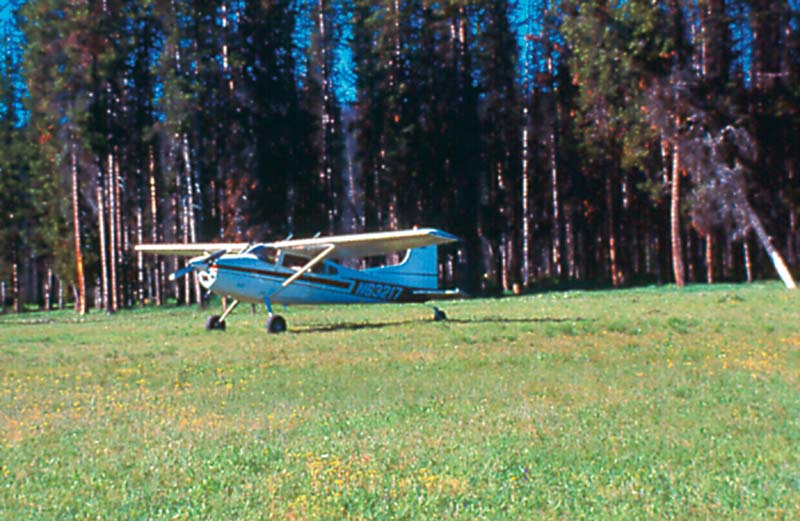 An oasis in the wilderness presents itself in the form of the Winter Inn tavern and store at Warren. 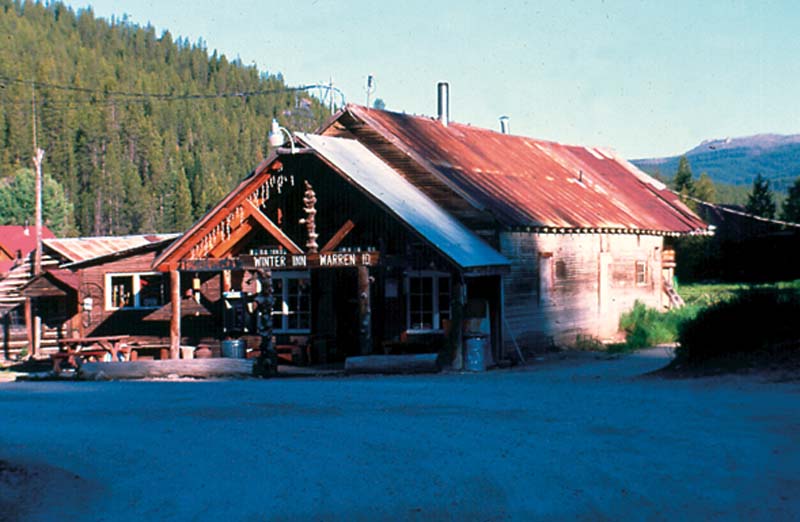 A welcome sign provides ground rules to those entering Warren. 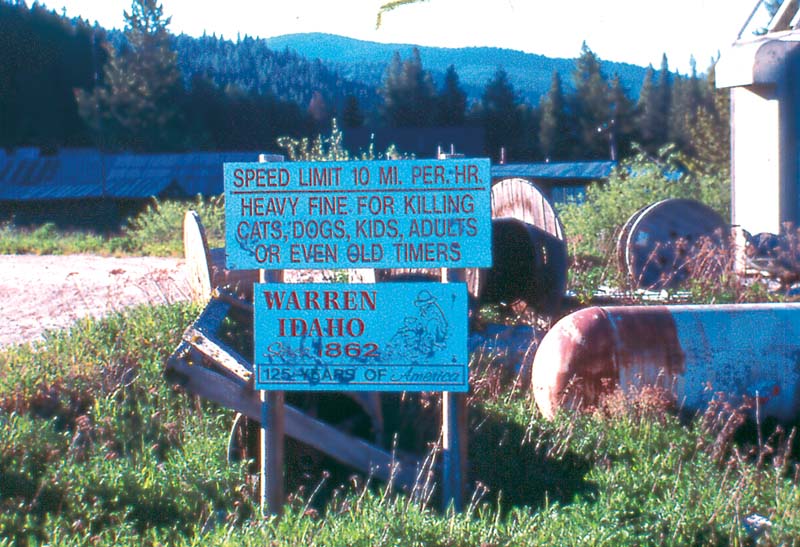 “There! Did that scare ya?” J .J. Jones said, grinning as he shut off the engine and pulled off his headset.

I unbuckled my seat harness, and slid out of my seat to the ground. My knees were momentarily a little wobbly, but the thrill of this adventure kept me on my feet.

As soon as I am sure that I am still alive, I am eager to see more.

We have just landed on a tiny airstrip in the bush country of the Frank Church-River of No Return Wilderness–more than 2.4 million acres of undisturbed, wild, and nearly inaccessible land embracing the heart of Idaho. This is bush plane flying at its most exciting. And I suppose to a fellow accustomed to the deck of a pitching and rolling aircraft carrier, it is probably fun, too.

This untouched treasure in the heart of Idaho received the “River of No Return Wilderness” designation from Congress in 1980. Idaho Senator Frank Church was highly instrumental in achieving this designation for Idaho’s crowning gem, and therefore in 1984, just before his death from pancreatic cancer, the public land’s title was changed to the “Frank Church-River of No Return Wilderness.”

This wilderness is as wild as the ride that got us there. By wild, I mean primitive in all of the best ways. Access is limited to foot, horseback, running the river in a boat, or by airplane.

There are no other ways to explore the vast acreages of high mountains and deep canyons in this wilderness. It embraces the old Idaho Primitive Area, and the Salmon River Breaks Primitive Area, in addition to adjacent wild lands, making it the largest contiguous National Forest Wilderness in the Lower Forty-Eight.

How is this national treasure best enjoyed?

Allow me to make a few suggestions:

Strap on a backpack filled with dehydrated meals and sleep gear, and hike to an authentic lookout tower–some available for rent for a solitary adventure on top of the world. At altitudes nearing ten thousand feet, the view is breathtaking.

Harness up a pack string and head out on your favorite trail horse. There are approximately 2,446 miles of trails to explore.Within the wilderness are abandoned mine shacks, unimproved campsites beside the rivers, and entire ghost towns established during the 19th Century gold-rush days. But most trails were built before 1930, and around four hundred miles are in very primitive condition. So it is wise to check current topographical maps, and inquire at the ranger stations before striking out on your own.

Bring your fishing pole and your best lures. Seek out the dozens of crystal-clear alpine lakes, teeming with prizewinning lunkers hungry for your bait. The rivers and lakes support twenty-three species of fish, both indigenous and anadromous (steelhead and Chinook salmon make their way up to the headwaters to spawn). Dolly Varden, rainbow and cutthroat trout abound, and sturgeon lay quietly in deep pools of the river. Getting to the alpine lakes may be challenging, but that’s what makes the catching that much more rewarding. Idaho Department of Fish and Game rules apply, so check before fishing.

The most exciting feature of the wilderness is the rivers–provider of food, transportation, comfort, and adventure. They are mighty rivers, long and pristine rivers that tumble along on their downhill quest to reach the sea. They are untamed rivers, with no obstructions; wild rivers that carve their way through volcanic regions dotted with boulders and rapids–especially the Salmon, the “River of No Return.” No matter how you get your gear to the headwaters, bring your raft or kayak and ride Class I to Class V whitewater all the way back to civilization. Full of thrills, chills, and spills, the river for which the wilderness was named is one of a kind. A private party float should only be attempted by experienced, properly-prepared boat handlers. For the less experienced, many outfitters are prepared to host the ride of your life.

Wildlife viewing is truly rewarding in this pristine and undisturbed backcountry. The U.S. Forest Service User’s Guide states there are 258 animal species living in the area, including mule and whitetail deer, elk, bighorn sheep,mountain goat, black bear,mountain lion, and moose. Several non-native species of upland game birds, such as chukar and gray partridge,were introduced before the wilderness designation.

The canyons, caves, and rocks bear witness to the indigenous peoples’ use of this area for twelve thousand years. The Shoshone and Nez Perce tribes traversed this land during seasonal gathering–hunting and fishing. Many of the current campsites are historic and prehistoric locations and have great cultural significance. It is important for archaeologists and scientific researchers to find artifacts in their original locations and positions. The Antiquities Act was created to protect the historic culture of the wilderness, and prohibits the collection or removal of archaeological artifacts. Always remember, “Look but don’t touch.”

Gold was discovered in nearby Florence in 1861. By 1866, news of the bonanza attracted thousands of miners into the wilderness in search of wealth. Small communities were formed, and then abandoned when claims ran out. Evidence of old mining claims and prospecting activities can still be found. Nearly 2,100 mining claims were located in, or immediately adjacent to, the wilderness. As of 1995, only twenty-five claims remained within the wilderness. In addition, an estimated 490 mining claims exist close to, or within, excluded areas.

For more than fifty years the few old-timers who live in the Frank Church River of No Return Wilderness have depended on bush pilots to bring supplies, medical care, and mail into the remote landing strips in the mountains of Idaho. The Central Idaho Wilderness Act allows the use of aircraft to continue. There are twenty-six active landing strips in the wilderness, and they will not be closed, other than temporarily for maintenance–unless they become unsafe.The few private strips are available for emergency use only, or on a fee basis with permission only.

It is a worthy legacy of Frank Church and other likeminded citizens that this rugged and exciting land protected by law forever remain unspoiled, untouched, and undeveloped, so that we and our children’s children can see, touch, smell and feel the way things used to be in the wild and wonderful Northwest.

For more information about the Frank Church River of No Return Wilderness, contact the U.S.Forest Service office nearest your point of entry. Do not go in without map,compass,and knowledge of conditions. Do not attempt to fly in without instruction from an experienced backcountry pilot.