Posted on by Carmen Magart

The Sorry Saga of Great-Uncle Darrell

By the time you’ve achieved a ripe old sixty, there’s usually a long list of characters who’ve played special parts in your life. Some of the actors along the way played only bit parts but nevertheless impacted your life in a big way. My Great-Uncle Darrell was one of those characters for me and although my memories of him are scattered—some humorous, some poignant—all are parts of the whole play.

Darrell Carlson was born on Mann’s Creek near Weiser on September 3, 1910, to Flora and Alexander Carlson. He was their last child and a twin. His sister Doris was taken by Flora’s childless sister to care for, because Flora was weak and sick for some time after unexpectedly giving birth to twins. When his mother was well enough and tried to take her little girl back, the sister cried and clung to the baby, begging to be able to keep her. She’d become enamored with little Doris and couldn’t bear to let her go. So Darrell’s sister was raised by his aunt, and the twins saw very little of each other while growing up.

At the time Darrell arrived, the Carlsons were running both sheep and cattle, had milk cows, chickens, pigs, and other farm animals. Al Carlson was a “hell of a drinker”—translation, he was an alcoholic and a binger. As people usually said in those days, he’d go on a bender, which meant a few days, weeks, or even months of nonstop drinking. Apparently, he had a fair amount of endurance when it came to drinking and often would be at it for two or three months at a time. During these months, he’d be virtually useless and Flora would be in charge of the ranch operation on her own, which included the sheep camps, milking the cows, and performing a myriad of farm chores. Children were expected to pull up the slack back then and her oldest son Gus, daughter Bernice, and Darrell no doubt all worked right beside her.

This is the atmosphere in which Darrell and his siblings grew up. There probably was a fair amount of discord, as there always is in families of alcoholics. There would have been yelling, arguing, perhaps cynicism, and criticism. Today all such things are known to damage a child’s psyche but a hundred years ago, kids were expected to shake it off and grow up the best they could. 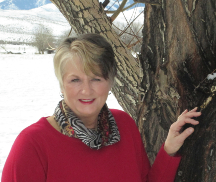 Carmen Carlson Magart left the sheep ranch on Salmon River at age forty to pursue an MA in education. She taught literacy at Boise State University and art and English in public schools. Carmen recently published a short series of memoir-based volumes titled Celebration of a Country Life (available from Amazon). She has resided on an Owyhee County cattle ranch with her husband Paul since 2003.
View all posts by Carmen Magart →