“The Frank” Almost Conquers the Experts

The water bottles are empty. Quintin’s mouth has never been so dry. He and Dan can see the river from this vantage point, but between them and the water lie about three miles of steep, rugged landscape in the Frank Church–River of No Return Wilderness. They imagine drinking vast amounts of that cold, clear liquid. But if they aren’t careful, they could end up getting halfway down the canyon only to be met by a sheer drop-off. Backtracking up the steep incline to search for another route would be impossible in 102-degree heat. Even with extensive backcountry and navigation experience, they struggle to remain vigilant. They still must count almost every step and confirm their progress on the map. There is no margin for error.

“In a situation like this, you have one shot, maybe two, to get it right,” my brother Quintin later told me.

Desperate, he decides to check out a possible route to expedite their descent to the river. He knows dehydration can mean death. Dan already has a withered look, but acts like he’s listening. Quintin takes his pack off, a physical sign of his intention to return quickly. He tells Dan to wait but when he returns minutes later, Dan has vanished. Quintin yells his name again and again. No answer. His heart banging against his chest, he scans the ridge above him and catches a glint, something reflecting in the sun. It’s Dan’s fly fishing case, which doubles as his hiking stick. Dan is inexplicably heading back up the ridge—in the opposite direction. Quintin claws his way up the slope after him as fast as he can.

“I barely had the energy to stop him,” he recalled. “When I finally got to him, he was totally out of it.”

Experiencing the symptoms of heat exhaustion and dehydration, Dan is angry and emotional. Quintin tries to reason with him.

“Look, I know you’re really thirsty. We have got to get down to the river.”

Only experience and trust matter at this moment. 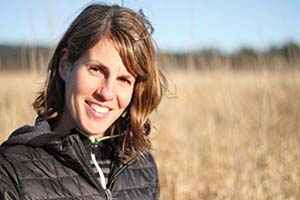 Kristen G. Nelson lives on Whidbey Island in Washington State with her husband, two sons, and two black cats. She teaches yoga and substitutes in the local school district.
View all posts by Kristen G. Nelson →
ORDER BY MAIL