Posted on by Jim Fazio

At the Old Lochsa Ranger Station

Story and Photos by Jim Fazio

As I look around from the porch of what was once the alternate ranger’s house at the Lochsa Historical Ranger Station, I have plenty of time to try to imagine these hills as a scene of blackened soil and smoldering snags. That was exactly what it looked like after the big fire of 1934, which I described in an earlier issue of this magazine (“Heroics on the Lochsa,” December 2013). Today, the forest in front of me is tall and green. The cabin is now the visitor center and entry point for a glimpse into the lives of hard-working men and women at a time before there was a road into the heart of the Clearwater National Forest. Here at the station, there was only a trail until Highway 12 was pushed through in 1952.

My wife, Dawn, and I serve as hosts for one week each summer at the historic site. Between the hours of 9 a.m. and 5 p.m. in that week, we sit on the porch across the narrow valley from the hills that rise to the very edge of the Selway-Bitterroot Wilderness Area and watch the intermittent flow of highway traffic. As I sit here, a steady stream of lumber trucks carries cargo east. Later in the summer, grain trucks from Montana will roar past on their way to the ports in Lewiston and Clarkston. 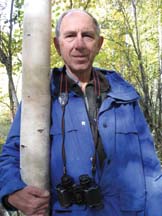 Jim Fazio is professor emeritus in the University of Idaho College of Natural Resources and a freelance writer who has lived in Moscow for four decades. He is past president of the Lewis & Clark Trail Heritage Foundation and author of Across the Snowy Ranges: The Lewis & Clark Expedition in Idaho and Western Montana.
View all posts by Jim Fazio →
ORDER BY MAIL