A Pocket of Peace

The semi-rural community of Menan (population about eight hundred), lies in a peaceful area surrounded on three sides by vibrant, growing communities. Twenty miles south is the largest metropolitan area on Idaho’s Snake River, made up of the adjoining towns of Idaho Falls and Ammon (combined population 76,550). Rexburg, with its Brigham Young University–Idaho enrollment of more than eighteen thousand and town population of twenty-nine thousand, is about eleven miles to the northeast. The closest town of significant size is Rigby, the Jefferson County seat, about seven miles to the southeast. As these towns and their suburbs and industries have grown, Menan has slowly transitioned from a farming-centered village to a bedroom community for all three places. But not completely.

I grew up in the 1950s and ‘60s in Annis, the neighboring community to the east, considered a part of the Menan area. I experienced firsthand the farming community days before moving away after graduating from high school. I came back to visit often and then moved back permanently in 1991 to live with my aging mother. During those years, I got glimpses of the changes that have gradually taken place in this part of Idaho’s Snake River Valley.

Agriculture as a way to make a living still wields a strong influence on Menan and the surrounding area. For the most part, those who have grown up and stayed here or who have moved here have made it a high priority to avoid the population density that surrounds Menan, to keep it a peaceful, pleasant, and safe place to live. For example, zoning laws and individual decisions not to let go of property for large housing developments are presently helping area residents meet this goal.

Menan is a thriving, progressive community. Vitality has been infused into it by newcomers and by people who have returned to their roots. Here and there, new houses are built, and older homes that become vacant are usually sold quickly. In the last year, a new farm supply store with a fast food section and gas pumps was built, a welcome addition. A new fire station was added recently and a building that dates back to the 1920s was turned into an upscale restaurant, drawing diners from near and far. Plans are in the works to build a new public library to serve Menan and two nearby communities. There is a K-5 elementary school serving children in Menan and in three other neighboring areas, and a large city park offers a place for all ages to relax and play. Through community effort some years ago, a walking path was made along the length of the town’s mile-long Main Street, running parallel to a wide irrigation canal that also extends the length of the street. The path is popular in all seasons for all ages of walkers, joggers, dog walkers, and bike riders. Even people who don’t live in Menan drive to one end of the path, park their cars and enjoy the walk. All of these amenities make life better for those of us living close to Menan. 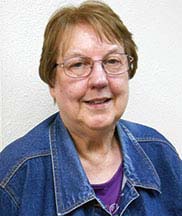 Linda Radford is a native of Annis who graduated from Rigby High School and Ricks College in Rexburg. She holds a bachelor’s degree from Weber State University and a master’s from Utah State University and worked for sixteen years as a teachers’ aide at Menan’s elementary school. Presently retired in Annis, Linda is helping to raise funds for a new library in Menan as a board trustee.
View all posts by Linda Radford →
ORDER BY MAIL