Posted on by Drew Winkelmaier

College Baseball As a Rite of Passage

Joel Bate, the athletic director at the College of Southern Idaho, doesn’t want new recruits to arrive in Twin Falls during daylight hours because, he says, “They do not yet have eyes for the land.”

What he means is the landscape can mislead newcomers into thinking it is not inviting. In 2016, I had just been recruited by pitching coach Nick Aiello to play two years of baseball for the Golden Eagles, having based my decision to accept his offer of a scholarship on the guidance of a former player and close friend, Grant Kukuk. I followed Joel’s order in driving my blue 1995 SUV from Reno to my new home in the middle of the night.

On the way, I had nothing to entertain myself aside from my own nervous thoughts. During the roughly seven-hour trip, my hands began to cramp from gripping the steering wheel too tightly, as I worried about what life would be like as a student athlete. I would be far from home for the first time, and didn’t know what to expect. The only thoughts running through my head were fearful ones: fear of not being a good enough baseball player and getting cut from the team, fear of what my role on the team would be if I made it, and fear of whether I even would fit into Twin Falls life. 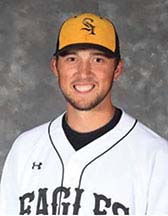 Drew Winkelmaier has played baseball for the last sixteen years of his life, recently ending his career at the College of Southern Idaho. This fall, he will pursue a journalism major at the University of Nevada, Reno. Drew hopes for a career writing for magazines and writing books.
View all posts by Drew Winkelmaier →