Posted on by Andrea Maki

The Story behind a Preserve for Central Idaho’s Wild Horses

Story and photos by Andrea Maki

It happened in a split second. He felt the subtle release of his lead rope and was off. They screamed for me to let go, but I held on with all my might, in disbelief they wanted me to fall and determined to defy their demands as he ran with me in the saddle. In my four-year-old mind, I was going to make them proud by staying on his back, as my dad and uncle ran after us, yelling. But then, where pasture met woods, I was thrown with intention, landing on the forest ﬂoor. I looked up to see the underside of that horse over me, and even in that moment realized he could have stepped on me, but instead he placed his hoof just next to my side. He knew his surroundings, his parameters, and exactly what he was doing. He had thrown me at that point for the same reason my dad and uncle were yelling at me to let go. All three of them understood what my four-year-old self did not: the extreme danger of fast approaching, low hanging, branches in the dense forest. I still marvel at that horse’s smarts and the lessons he impressed upon me, including my aunt’s subsequent insistence that I immediately get back in the saddle.

If I were to select a single experience to exemplify my life’s journey, that is it. While it was not for me to comprehend and appreciate at the time, that horse was gifting me life lessons in being and a glimpse into my future travels. I can still feel his larger-than-life presence standing over me, as a purposeful teacher and guide. I have absorbed his gifts of truth, awareness, and endurance, which shape me to this day, and are at the heart of Wild Love Preserve and my efforts to preserve Idaho wild horses on their home turf in central Idaho.

In 2010, I inadvertently founded Wild Love Preserve as a nonprofit with a goal of hammering out a collective new solution to the wild horse crisis, which, in reality, is a human relations issue. Wild horses are wild horses. The land is the land. Wildlife is wildlife. Two-leggeds, however, can be a tricky bunch. 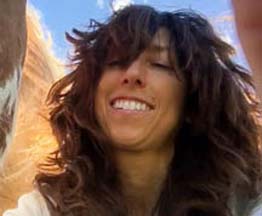 Andrea Maki was born in Seattle in 1966, and graduated from New York University in 1988 with a Bachelor of Science in painting. In 1989 she returned to the Northwest, where she resides. Her contemporary art career spans thirty years, exhibiting and in collections nationally, including the National Museum of Women in the Arts. In 2010, she founded Wild Love Preserve.
View all posts by Andrea Maki →
ORDER BY MAIL